skip to main | skip to sidebar

vsftpd has a very annoying inplementation and configuration compared to pureftpd and alike.

The fix I found is to set the following to YES in the vsftpd.conf:

This way only ftp user can mess with the files and no one has access to the ftp account. I recommend leaving hte local umask as default instead of 022 so others can't read.
Posted by DreadStar at 13:34 No comments:

I'm unsure if this woman aims to take money she is not entitled to on purpose or it is severe incompetence. On first calling her as I had not had a reply to an enquiry I had about accommodation I was due to book, I had a very rude and abrupt response from herself, and the man who first answered the phone sounded like he was defending a rather disorganised and stressful person.

Very close to the booking dates Karen Durant contacted me to say that the accommodation requested had already been booked by another! This is something of a habit for her and there are other reports on here illustrating my point! Even thought I confirmed it was available and speedily sent off her booking form with my credit cards in insecurely by email as per her request!

I was offered alternative accommodation but the be honest most of the accommodation I have seen on offer from Karen Durant is less favourable than a week in a Mosside estate flat! Tripadvisor is full of negativity for all of her properties I have been shown, which seems odd as she keeps these properties on her site! I'm sure a horse owner would soon ditch a loosing horse, but this is part of business she fails on hard!

When a refund was requested the time for refund was double that of the time to take payment and seemed come in 3 days after I chased Karen Durant again for payment! Not only was there a delay meaning I had to move funds to ensure I could pay for my other accommodation losing me money, it was also over £8 short! I emailed Karen Durant about this and had no response so have informed my bank to take this charge back and submitting them details explaining why that visa will review.

The 4u at the end of her domains says it all really. Just google phones4u/singlepoint complaints and you will see she seems to be emulating a lot of their style ;)

Pidgin-sipe is a bit of a PITA to compile on RHEL/CentOS. I read the README and attemted to yum the dependancies starting with a "yum groupinstall 'Development Tools'" Ensure the devel versions of everything are also included especially pidgin and then I hacked the configure script:

Ensure you have the right line first as line numbers might change with releases.

Compile and install! Ensure the plugins get stuffed in /usr/lib64/purple-2/ if your using a 64 bit install else pidgin won't find them.
Posted by DreadStar at 13:45 1 comment:

mtruesdell@stackoverflow.com very helpfully documented the odd behavior Outlook shows when dealing with line breaks in a most useful manner:

Please note that he tried all of this with Outlook 2007.
So if possible, you can end messages with a sentence-terminating punctuation mark, or even a tab."

Big yourself up mtruesdell this has been doing my head in the last 2 hours!
Posted by DreadStar at 17:13 No comments:

HP is the virus!

I have been seeing what I thought was a botnet virus on my network trying to talk to it's command and control server via constant UDP to everyone on port 34447! I had two laptop clients doing it and their owners where none the wiser. I reported this to HP's internal security teams to see if it was known to them and for them to get solving. One just stopped with no info from it's owner and the other was eventually rebuilt. Now I look at the users machine I note it runs a print server! A HP wireless print server! I smell the potential FAIL as most these products are made in India and Eastern Europe like their drivers, so I disable it. Bingo no more UDP broadcasts!

This is what the client running the print server sends:

The source port moves but is sometimes reused the rest is static.
Posted by DreadStar at 12:22 No comments:

So I expected in the 5 years since I last called apple support they may have improved some but nooo.

I have been trying to install XCode for about 2 hours now and finally hit success thanks to the community and some guess work.

Apple still seem to find it hard to make decent documentation and get carried away in the world of fluff and prettification. This becomes evident when you try to google out how to get and install Xcode the MacOSX development kit which I needed one small component from!

Their site on the user side just gives info on what this package does and that it comes with MacOSX with no download link so you'd think one might already have it. Perhaps it would be hiding in the Applications/Installers folder as has previously been the case but again noooo. A google external to apple shows that you can either grab a hefty download from ADC after sending Apple your life details and then some which didn't seem worth all the effort for the small component I needed. The other option is to install from DVD which I liked the sound of so I popped it in and rummaged around it for about 30 mins before I gave up.

Next step was to call support which is a tricky job as none of their support numbers appeared easy to find on the web or in the documentation supplied with my new macbook probably because they are overrun with stupid questions due to lack of decent documentation. I finally got there via calling my local apple store and having their phone system redirect me!

Once connected to Apple Care probably in some far flung sunny destination talking to a operator who has probably never even seen a macbook I proceeded to ask about XCode's whereabouts on the DVD or elsewhere and firstly was told "SCode?" in broken english to which I replied "XCode, X as in X-Ray" and was greeting with a confused noise and then silence, so again I asked "Is it on the DVD, I can't find it on the first disk" with which the operator replied "ILife on second CD" to which I replied "I don't think that's what I'm looking for" and was then put on hold and eventually disconnected probably to keep waiting times down.

I had another google I knew the answer was somewhere and didn't include a 2GB download(which is my monthly DL limit), nothing came back. I put in the second DVD before I gave up and took the dog for a walk before coming back and doing it the GNU way which IMO is far easier and should not be! Bingo!!!! the second DVD contains the xcode package!!

Now I wish out of all this apple would train their operators but I doubt they will! When I first got my Macbook most the scripts underneath the GUI where very badly written and checks reported the wrong issues since the checking was not done well at all! I expect this is probably still the case too :(

I advice anyone thinking of buying a support contract for their apple equipment and software to do it from a company other than apple that also offers business support as it will probably be cheaper and better, or you could just give me a call.
Posted by DreadStar at 17:39 No comments:

Thomas Nayler is a London based jeweller specialising in custom graffiti style pieces . Quite resonably priced he has supplied commisions to the stars and been featured in many lifestyle magazines. I decided to get another piece of his work commissioned lately and here are the results. 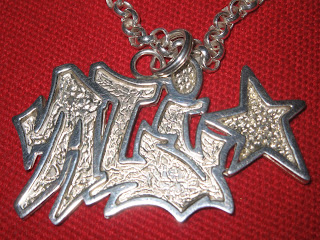 The first piece I had made I haven't take off since I bought it and often gets commented on. 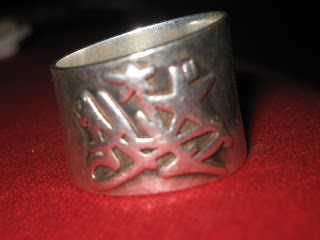 You can get your own and browse his work here Thomas Nayler
Posted by DreadStar at 16:40 No comments: